How to upload a file using FTP

The tsNet external allows you to transfer data over more than just the HTTP and HTTPS protocols.  It also supports transferring files via the FTP, FTPS and SFTP protocols.

This lesson shows how you can upload a file via the FTP protocol using a publicly available FTP server.  Note that the server used in this code automatically removes uploaded files from the server as soon as the transfer has completed for security reasons.

Create a new stack then drag a button and two fields onto it.

Set the name of the fields to "Output" and "Server Response". 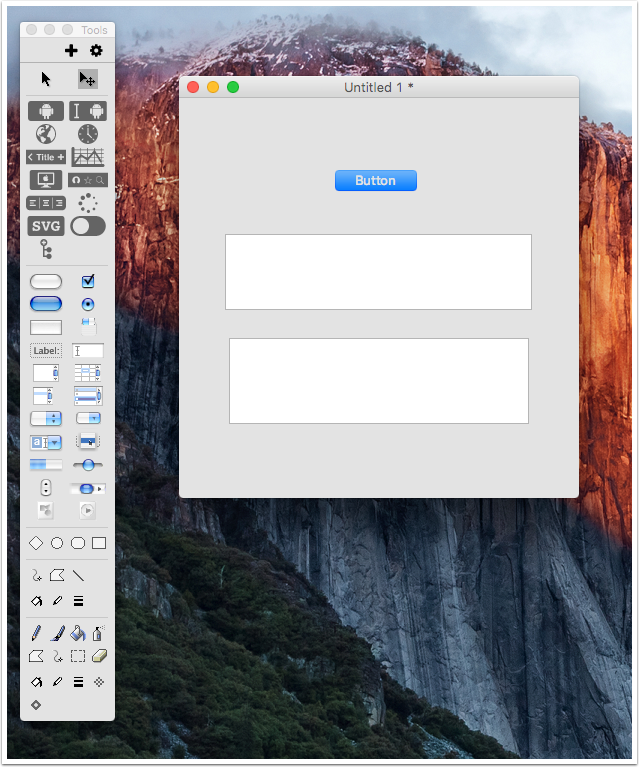 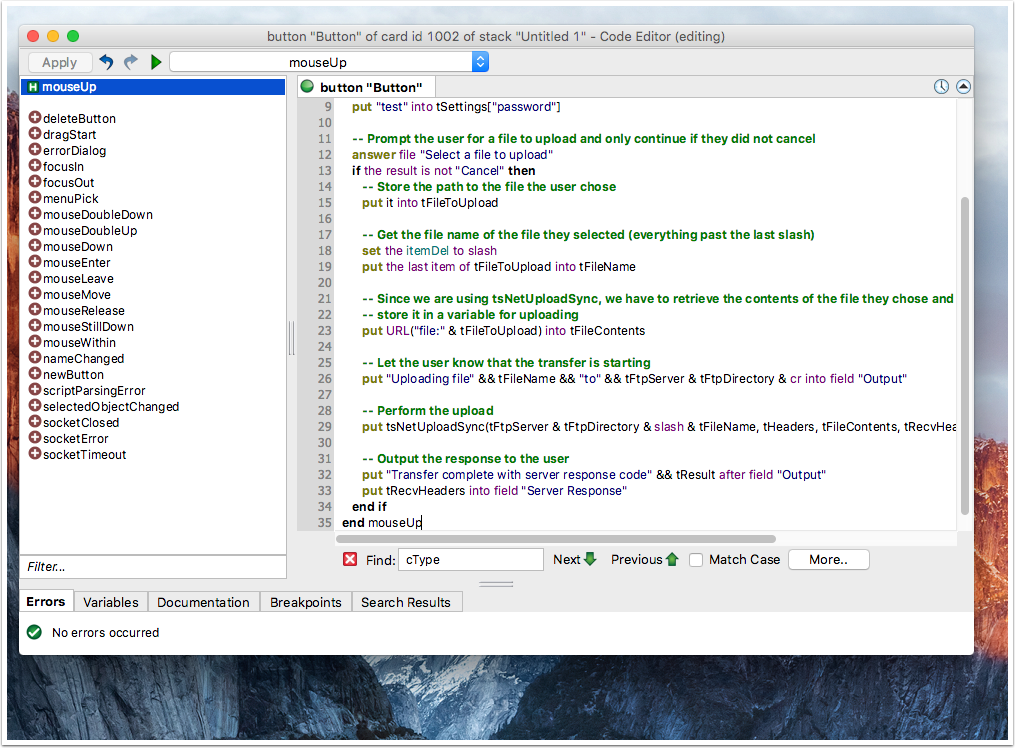 Switch to Run mode and click the button. The application will prompt the user for a file to upload. 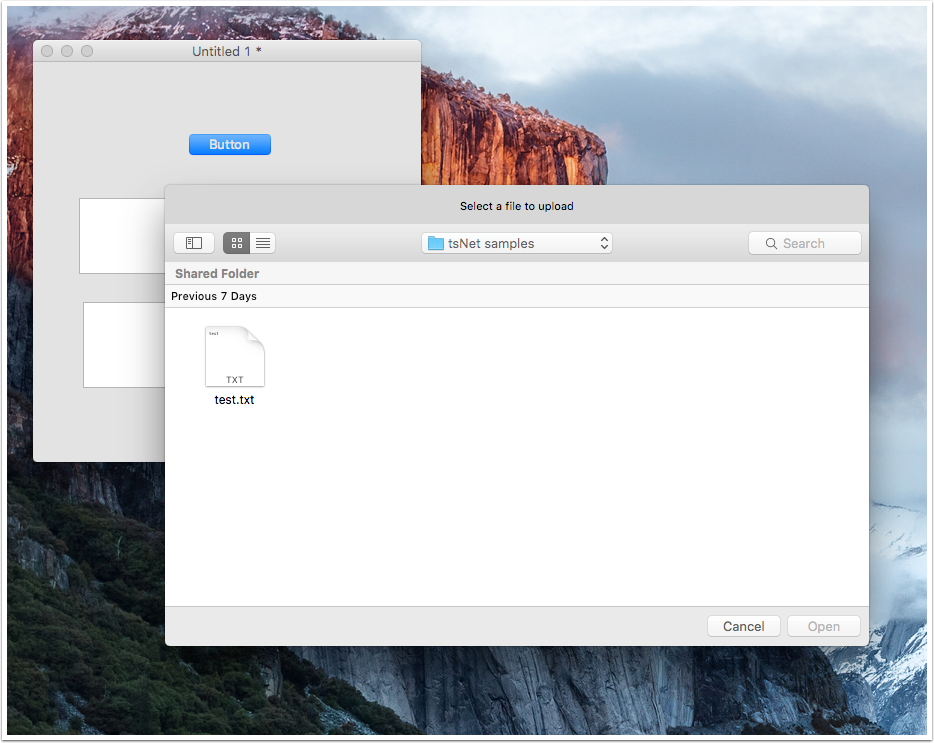 After selecting a file, the application will perform the transfer. 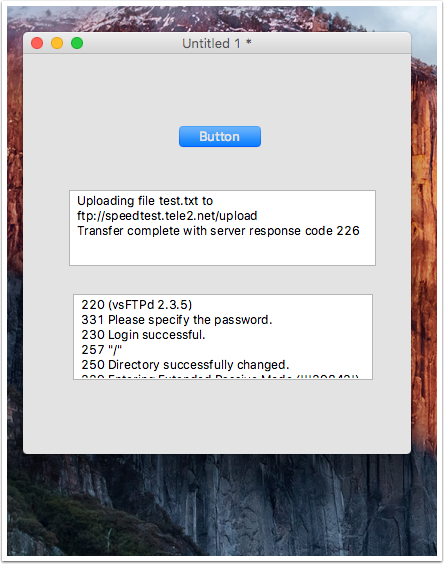 As can be seen in the example above, the tsNetUploadSync command returns various pieces of information that relate to the transfer.

In particular, the tResult variable used in the above example will contain the status code of the last FTP command that took place as part of the transfer.  Unlike transfers over the HTTP protocol, FTP transfers often involve several commands being issued by tsNet.  These commands happen transparently and perform tasks such as changing the current directory and authenticating to the FTP server.

By default, tsNet does not automatically close the FTP connection after transferring any data.  In these cases, the last command to be issued during a transfer is the upload/download request itself.  A successful server response code to this command is usually a 226 code (meaning "Transfer Complete") as seen above.

If tsNet has been set to close the connection (see the "no_reuse" option that can be passed to the tSettings array in the LiveCode dictionary for more information) then the last command to be issued will be the disconnect request.  This usually results in a server response code of 221 (meaning "Goodbye").

Note however that if the transfer is unsuccessful, the tResult variable will contain an error message that begins with "tsneterr:".

Another piece of information returned by the function is stored in the tRecvHeaders variable and can be useful in diagnosing the FTP server responses.  It provides a full log of all the server responses during the course of a transfer.

I've tried the lesson but just can't get it to work.
My server only allows TLS/SSL Explicit encryption so I've tried the code with adding:

I get the following error:

Any idea what I'm doing wrong?

In many cases, servers will have multiple server names that can be used when connecting to them. However, when you connect via SSL, you must connect using the server name that is specified on the SSL certificate.

If this is just for testing purposes and security is not really an issue, you can also disable the SSL verification inside tsNet by issuing the following command:

Maybe this comment has been made elsewhere, in which case my apologies:

and that will upload a "binary" file. (all files in the end are of course "binary" really, but Unix has infected us with the idea that there are text files and binary files.)

I have the following script that works fine on OSX and iOS hardware, but not on iOS simulator and Android hardware (yes, internet is enabled in android standalone setup). On Android it returns “tsneterr: (15) Could not resolve to host”. On iOS simulator return nothing. Is there a reason?
on DOMirrorSP pLongImage --pLongImage is the long name of the card to take a snapshot
put the rect of pLongImage into tRect
--export card image to var
try
export snapshot from rect tRect of pLongImage to tImageContent as PNG
catch theError
answer theError
end try
TransferScreen tImageContent --tImageContent is the binary of the screenshot
end DOMirrorSP

I see you have already found the bug in the Quality Control Centre.

I have added a comment with more details on the steps needed to replace tsNet with the updated version but please let us know if it is still not working for you.

Hi Elanor, is there any way to spicify to "overwrite" the file being uploaded if another one with the same name already exists on the server? Many thanks for your customary help.

I've done some testing and I found this is the default way the command operates, so please disregard my previous comment.
Thanks and regads