The Standalone Applications Setting dialog allows you to create settings for your standalone application. This dialog can be found in the File menu. The settings you enter are applied to the current front most editable stack and are saved with the stack. This means you only need to enter the settings once for each application you create. The same settings will apply if you do another build in the future.

The General Settings pane allows you to set the top level properties for your standalone. 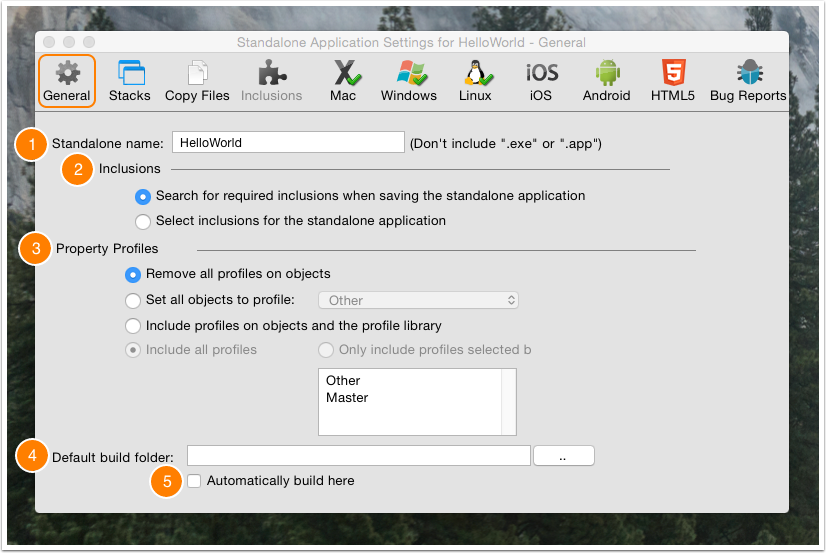 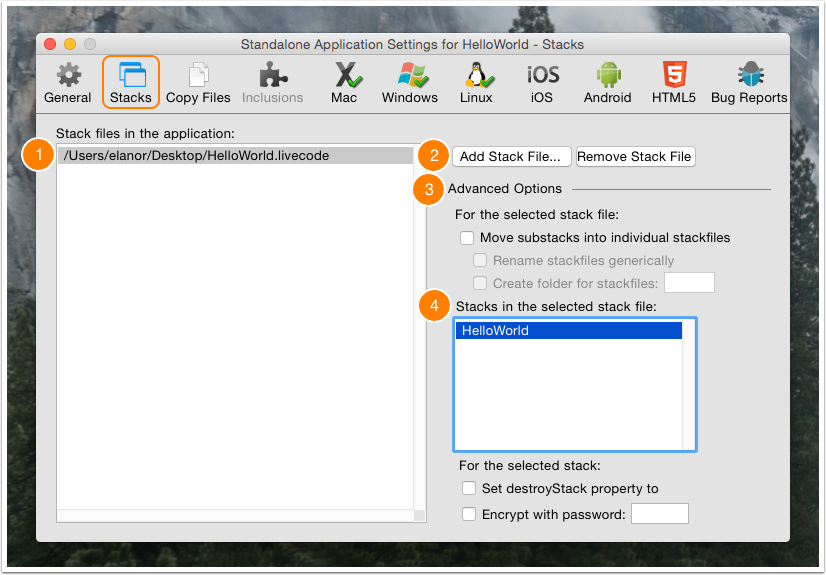 Note: If iOS or Android are selected in the Standalone Builder settings, the Stacks pane is grayed out. To work around this and password protect a stack, or add stack files, uncheck iOS and Android, check any desktop platform, and make your changes. Then uncheck desktop and recheck iOS or Android to build your standalone.

Use this section to add other files to be included in the standalone, this could be images, sound files, fonts etc. 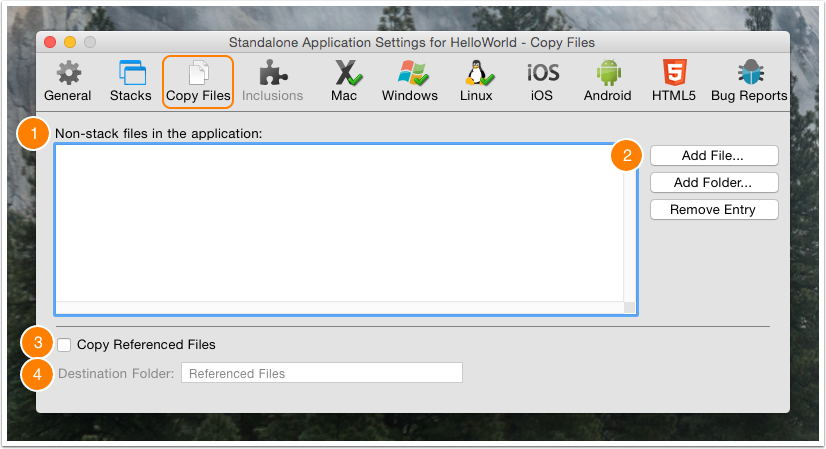 The list of resources available to select for inclusion in a standalone application are a combination of currently installed LiveCode Builder extensions, externals and database drivers (both built-in and those found in user folders), and built-in resources and script libraries.

If you selected "Select inclusions" in the General section you use this section to select the widgets, libraries and externals to include in your standalone. 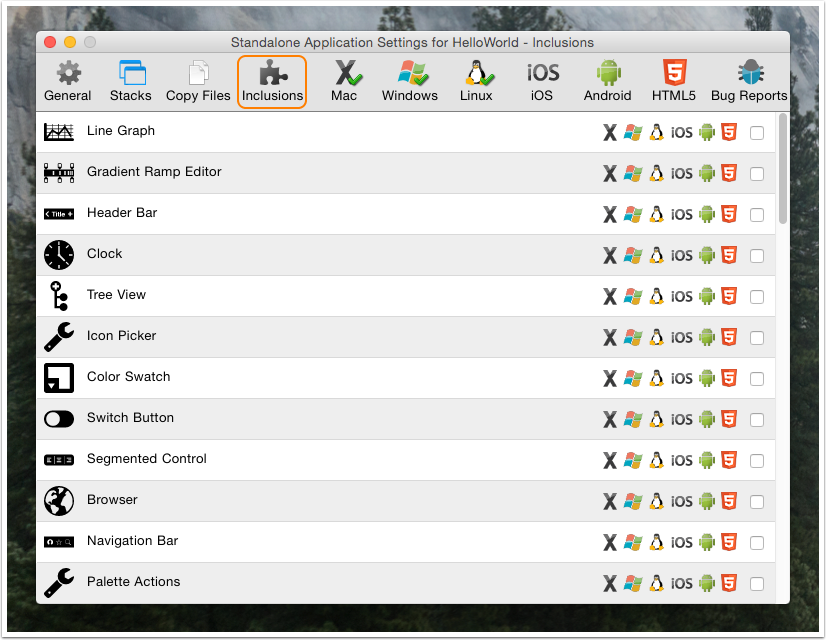 This section allows you to set the Mac specific settings for your standalone. 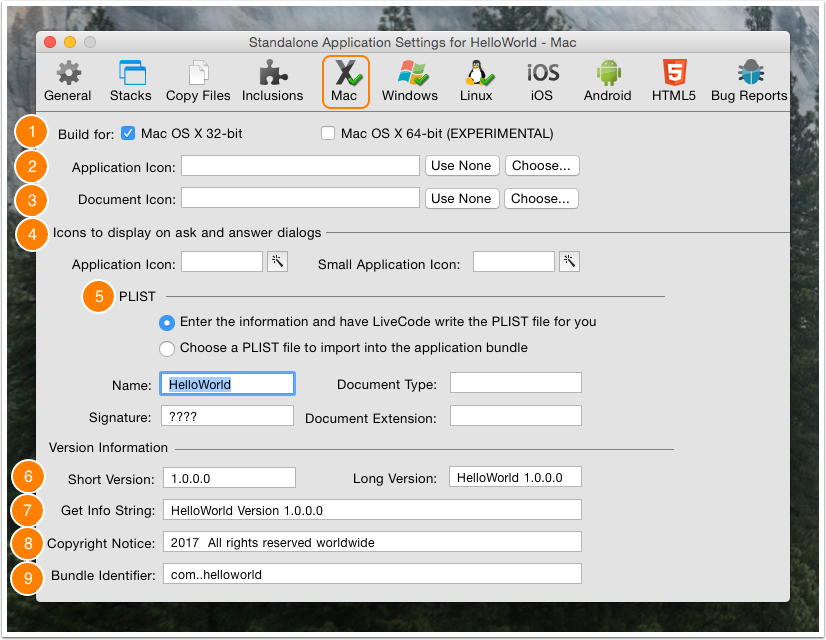 This section allows you to set the Windows specific settings for your standalone. 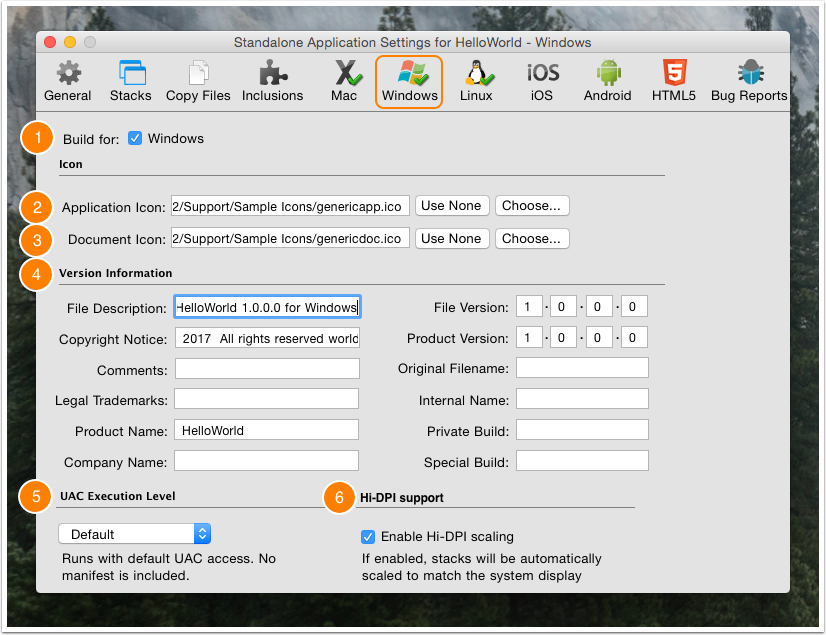 This section allows you to set the Linux specific settings for your standalone. 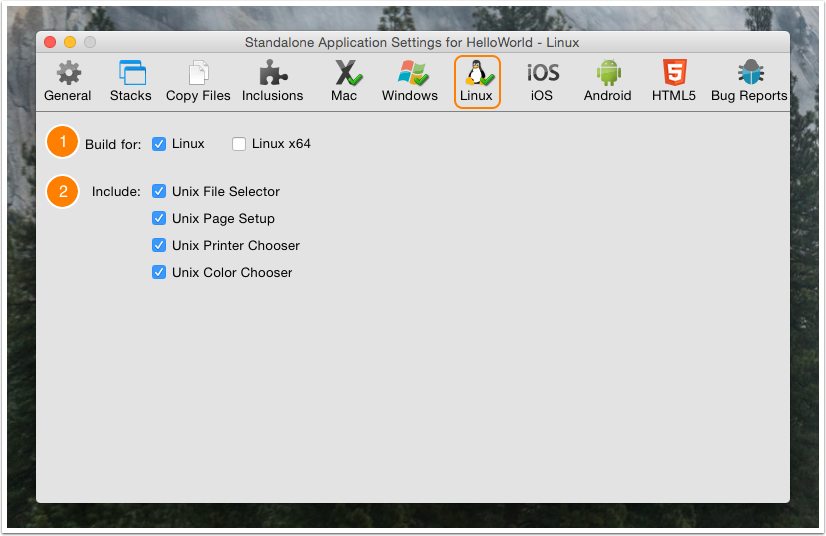 This section allows you to set the iOS specific settings for your standalone. 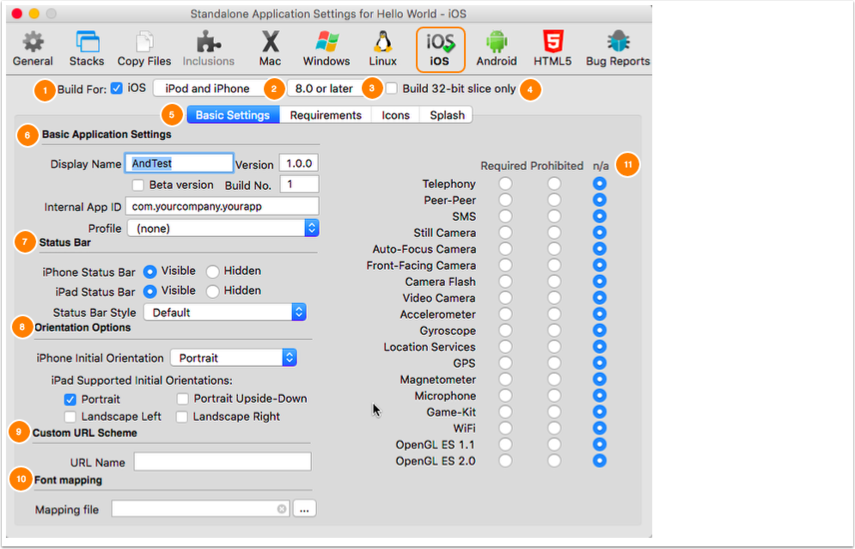 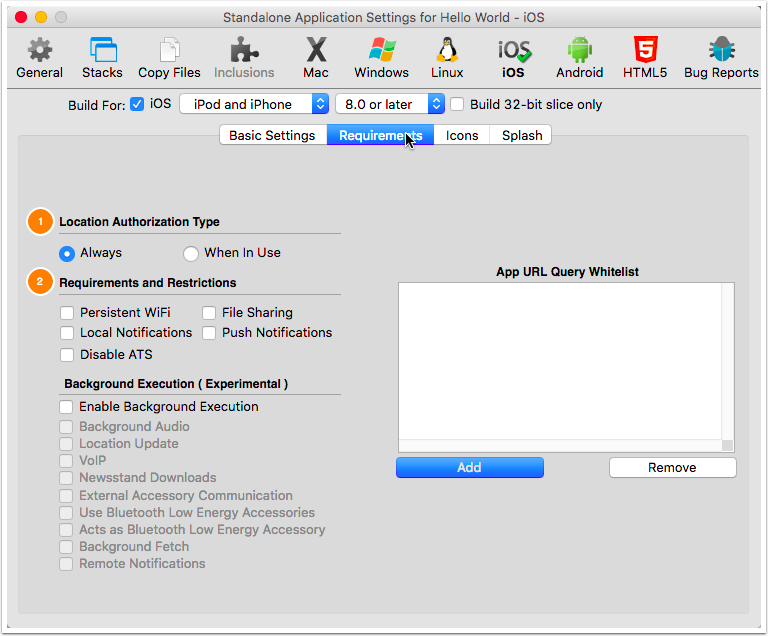 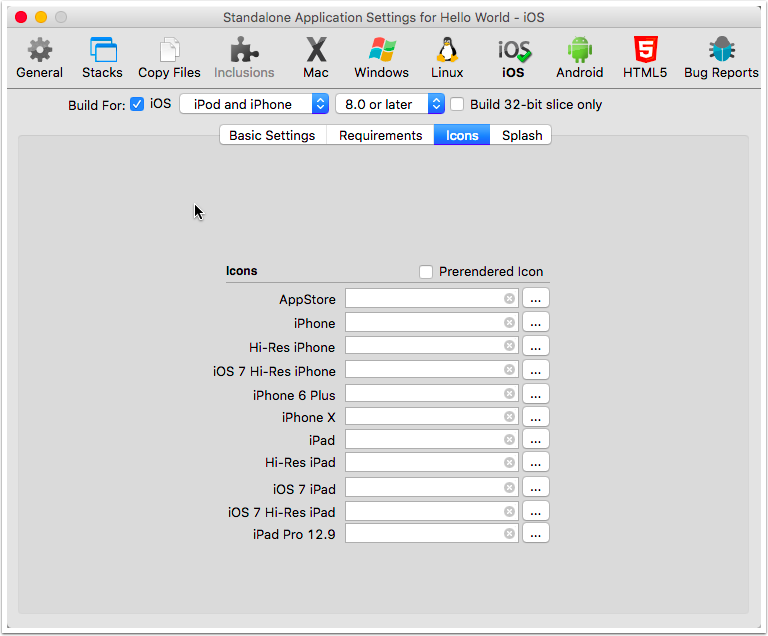 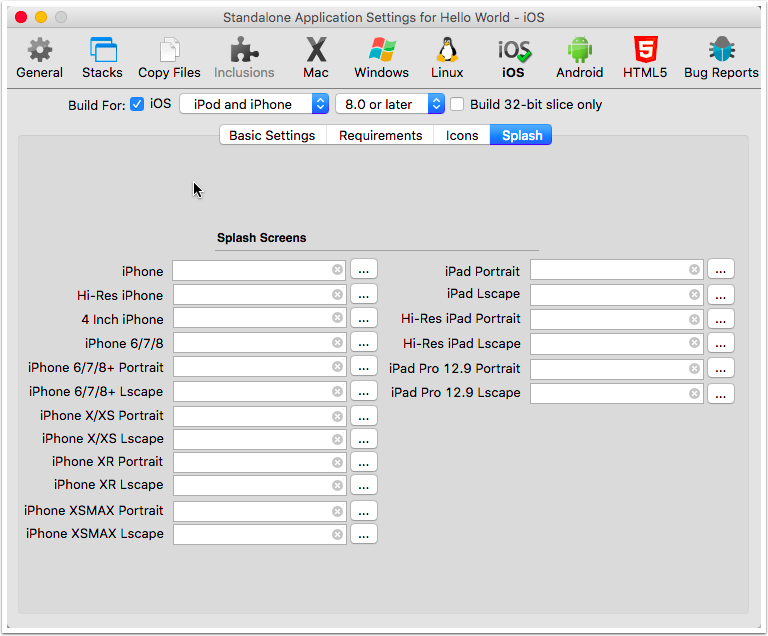 The image files to be used as splash screens on different devices. The images must be the correct resolution and orientation.

This section allows you to set the Android specific settings for your standalone. 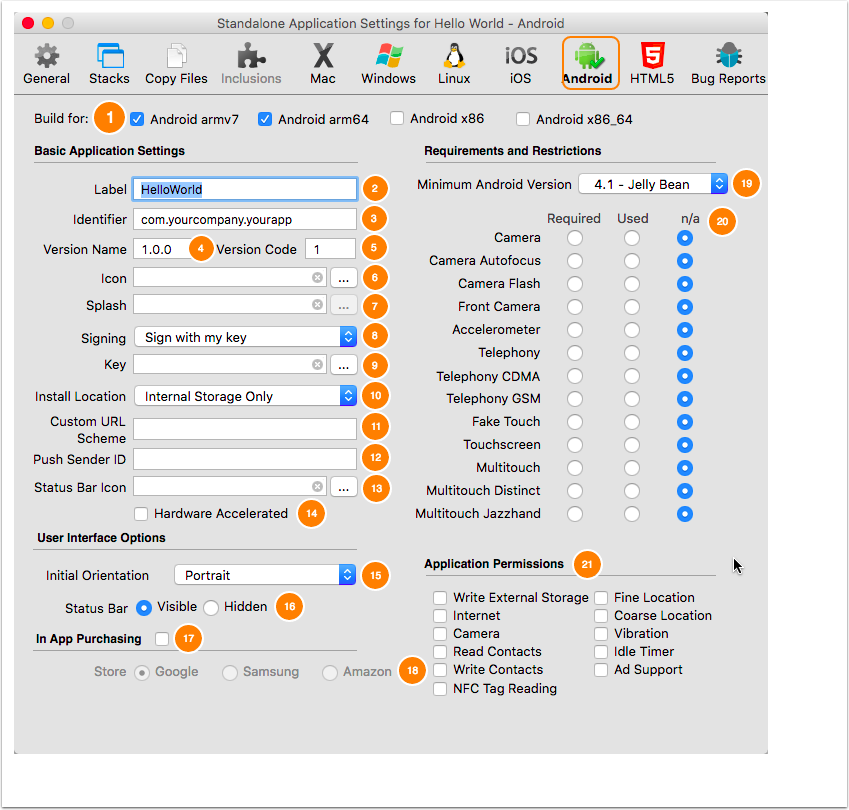 An android manifest merging mechanism has been added to the android standalone builder. This enables manifests to be included in extension jvm-android code folders which are then merged into the main manifest at build time.

Previously, it was possible to override the template manifest by providing a new template in a file called AndroidManifest.xml and including it in the Copy Files list. Since the merging mechanism is more general, enables multiple manifests and does not require users to update template manifests with new template replacement strings, this feature has been removed - instead any AndroidManifest.xml files included in the Copy Files list will be merged into the main manifest at build time. 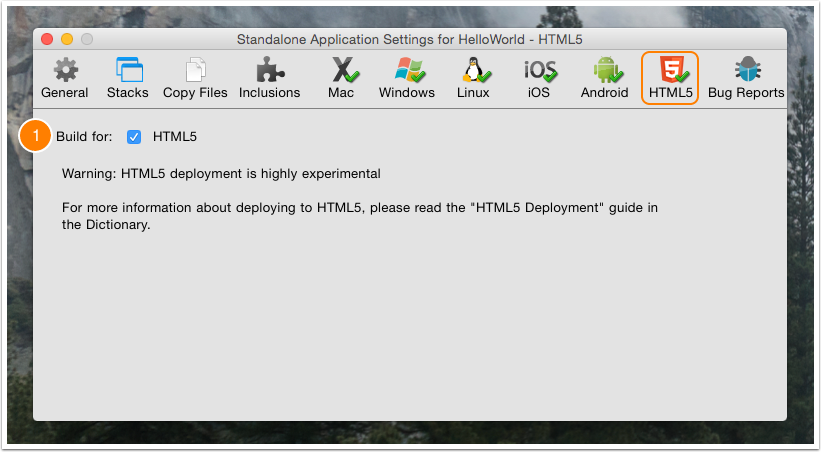 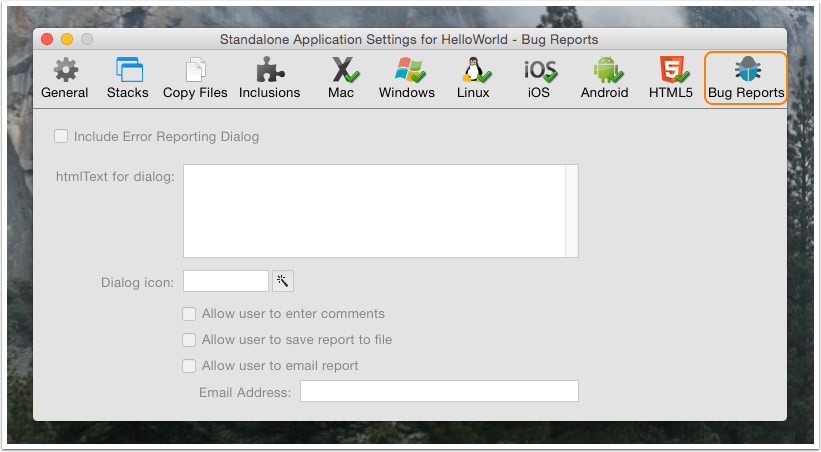 This appears to be similar to the User Guide documentation.Wondered if there is there any more detailed help about the options? In particular I'm currently looking at Copy Files pane and would like some clarification on paths, file locations and how the Copy Referenced Files option works. Thank you.

Hi Jim1001, we don't have any other documentation but I'll do my best to answer you here.

Any files you include here will be included in your standalone, where the files are stored depends on the platform but you can use specialFolderPath("resources") to get the location of any included resources. This will return the correct resources folder for the platform the app is running on.

The "Copy Referenced Files" options loops across every referenced file on your stack (images, players etc) and includes the referenced file in the standalone. These files will all be added at the top level of the resources folder .

I hope that helps, please let us know if you have any other questions.

Is there a way to alter the standalone application settings by script? Especially version data (which is set in several fields) would be time-saving to be able to set by script, and not manually.

Yes, the standalone settings are stored in a custom property set of the stack that is being built so you can set them in script. For example

set the customProperties of this stack to tStandaloneSettings
end setUpStandalone

Can a script read the App version? In other words in the "About" message of my mobile App I would like to show the stand alone version of that particular build, not the LC version. Can I do that? How?

This gets the value set in the Standalone Settings and stores it as a custom property the standalone can access.

on mouseUp
answer the cStandaloneVersion of this stack
end mouseUp

You can see all the standalone properties by opening the Stack Inspector, selecting the Custom Properties pane and changing the set to cRevStandaloneSettings.

Many thanks Elanor this is very helpful.

Enable the Override for Standalone setting to assign a custom icon for your standalone game. You can upload different sizes of the icon to fit each of the squares provided.

Just going to get started ill put this to the test

Excellent lesson!! However if you put in 8.0 as minimum iOS version (point 3 in iOS base settings) you will get error ITMS - 90184.
Thanks to DR Whites post 517 I put in 10 instead and it worked.
Thank you anyhow for the wonderful job you did with this lesson.
Rainer

Thank you for your kind and helpful comment. I have added a note to the relevant section of the lesson.

Panos provided me with an excellent description about using the .app/Contents/Resources/_MacOS directory of the macOS bundle and why this is required on macOS. I am including a SQLite db with some demo apps, though for production apps I use a folder outside of the app bundle. I am pasting the info here:

Apple does not allow
other files sitting next to the executable (i.e. in the /Contents/MacOS/
folder).

As stated in their Technical Note 2206
(https://developer.apple.com/library/mac/technotes/tn2206/_index.html#//apple_ref/doc/uid/DTS40007919-CH1-TNTAG205),
Apple does not allow application to have unsigned code in the MacOS folder.

To comply with this new rule, every non-executable file is now copied in the
folder .app/Contents/Resources/_MacOS.

As for the executable files, they are still copied alongside the engine, and
located in specialFolderPath("engine").

This change does not impact any of the engine functions, which automatically
redirect any path targeting the former location of the resource files.

However, the same does not apply to the externals, as they cannot determine if
a path belongs to the app bundle or not; that affects also LiveCode external,
such as revDatabase, this relocation breaks any script calling externals with a
resource file.

In order to help with this overcoming this issue, the option Resources has been
added for specialFolderPath on Desktop platforms, in LiveCode 6.7.2.

That will allow you to get the right path to the resources, being in
development or standalone mode.

So, in other words, you have to replace the function: