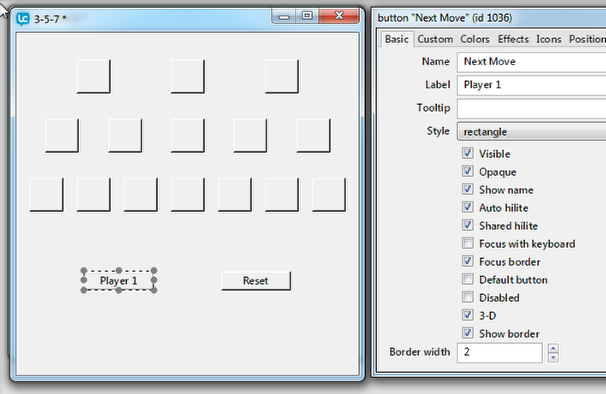 I am getting the notification that I won everytime I click any button I have copied the code exactly... is anyone else getting this problem or know why I am getting it?

this lesson is the last one in a set of three.

You should make sure that you followed the instructions in the previous lessons. In particular, you should ensure that the buttons are correctly named, as specified in the first lesson: http://lessons.runrev.com/s/lessons/buckets/809/lessons/44007

If the buttons are not named properly, then "testForWin" assumes that all playing buttons are invisible and the last person playing selected the last button(s).

Hope this fixes it for you.

it has to do with how you copy and paste the code from the pdf. double check every line to make sure that all of the executable code is NOT in a comment line! That was my issue.

yes, when you copy and past the code from the lessons, then you can get certain characters that do not paste directly into the LiveCode Script Editor. It is necessary to remove characters at the beginning of each line.

I wrote took the first two parts of this tutorial and everything worked flawlessly.

I did not copy paste the code, instead I wrote the code literally as written in this tutorial, but without the // green sentences.

Do I need this green sentences in my code as well? I thought they are only there to clarify what you need to do, and in the other parts of this tutorial it worked without this code. I double checked and everything is the same as here.

I wrote the code down in chronological order as in this tutorial, so starting from above with local gCurrentPlayLine etc.
After each piece of code I have a return, but I tried with and without return, nothing changed.

Is there anything else I could have overlooked?

i get the same problem with Ellery, every time i click a button the notification pop-up that it is an invalid move.

I think this reply is relevant to everyone who has so far posted comments to this lesson.

I have attached a sample stack that implements the functionality of this lesson. This should take the pain out of copying the code in the lesson and formatting it.

This game implements basic two player functionality and does not provide any artificial intelligence that allows the computer to play against a human player. So the "Player X" button indicates what human player is currently playing.
If one player is finished making their moves, then they should hit that button. The button toggles the number between 1 and 2 and the next player then makes their moves. When the next player is finished, they then hit the button, and so on, until the game is over.

I hope this addresses a number of issues you may have been having with this lesson.

When I save this stack as a standalone app for Windows and run it then two indications appear in the user interface that look like a button:
1) revGeometryBack
2) revCommon

Even when I use the stack that is downloadable from this lesson.

How can I avoid those indications?

I have tried the supplied stack as well as my own written code following the tutorial but then i m having same problem like Wouter De Backer.

After building standalone program for Mac osx. When running the program, i got revGeometryBack & revCommon button.

Any advice on how to get rid of these buttons?

I have the same issue as Wouter De Backer but with Mac OS:

appear on top of the buttons.

How can we get rid?

Some libraries in LiveCode are saved within buttons and these are included when a standalone is built. This will also explain why you will not see them in the IDE.

The main reason these are showing is because “control” is being used instead of “button” in the reset game handler. Changing this to button allows the standalone to work as expected. The correct resetGame handler is shown below-

command resetGame
// Declare a variable.
local tControl
// Specify a delimiter that allows you to select an item in a line of text.
set the itemDelimiter to space
// Loop through all the buttons on the card.
repeat with tControl = 1 to the number of buttons of me
// Make the button visible that we are currently pointing to.
set the visible of button tControl to true
end repeat
// Set the label of the next move button to Player 1.
set the label of button "Next Move" to "Player 1"
// Ensure that the player can start selecting from any line.
put empty into gCurrentPlayLine
end resetGame

I will also update the lesson with this information

Item -1 refers to the last item, I just did a quick test and it appears to work in 9.5 here. If you have named your buttons slightly differently it might be that the code needs to be adjusted to match your button names.

Could you try the sample stack attached to the lesson and see if that works for you?