How do i use the Speech library on Mac,iOS and Android?

Starting with version 9.6 Livecode includes a new  library that provides functionality for synthesizing speech for macOS, iOS and Android. The library allows for choosing from among the system voices, altering the speech rate and pitch of the voice and speaking an utterance.

Create a new stack and add a field and a button to it. Name the field for example "Message2speak". 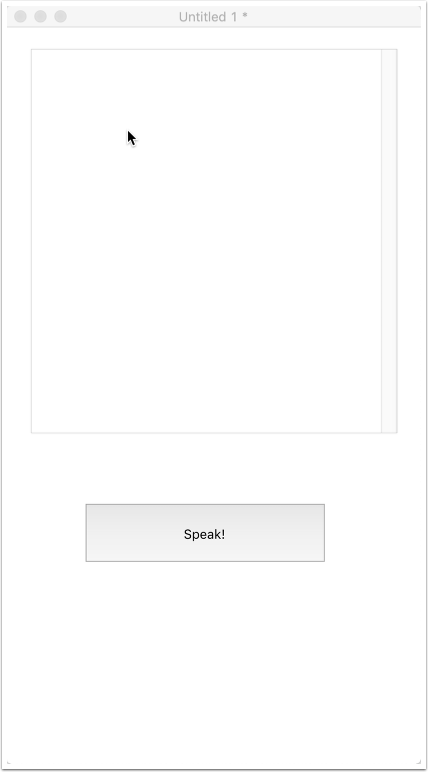 Before we can use the library it has to be initialized. On Android it is mandatory that you initialize it in (pre)openstack.

In that way, the library will be ready for use while your app is running, and it will be finalized once your app closes.

Create a stack script and add the following script to it.

To make use of the speech library you'll need to manually select it in Standalone Settings under Inclusions. 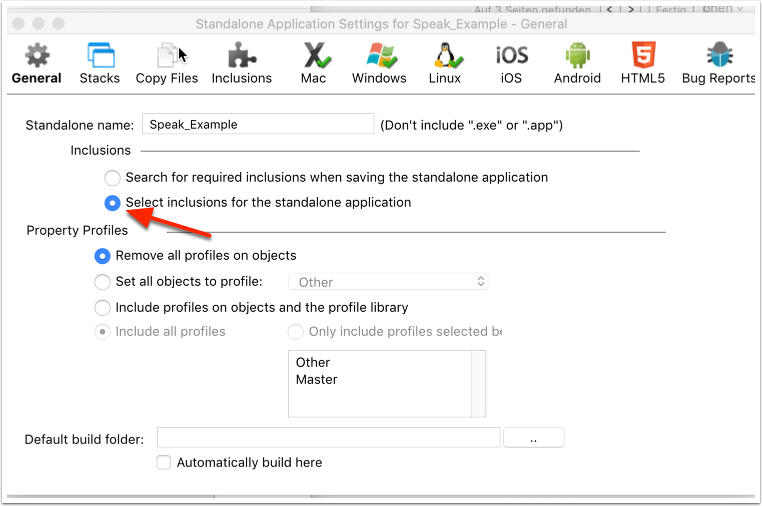 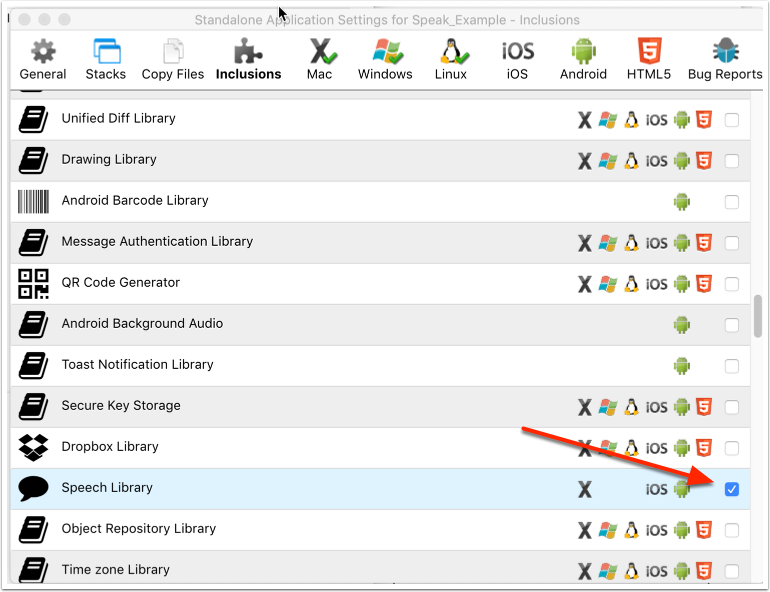 Select the platform to which you want to deploy the app. Please remember that only Mac OS, iOS and Android are supported.

In this lesson we deploy to Mac OS. 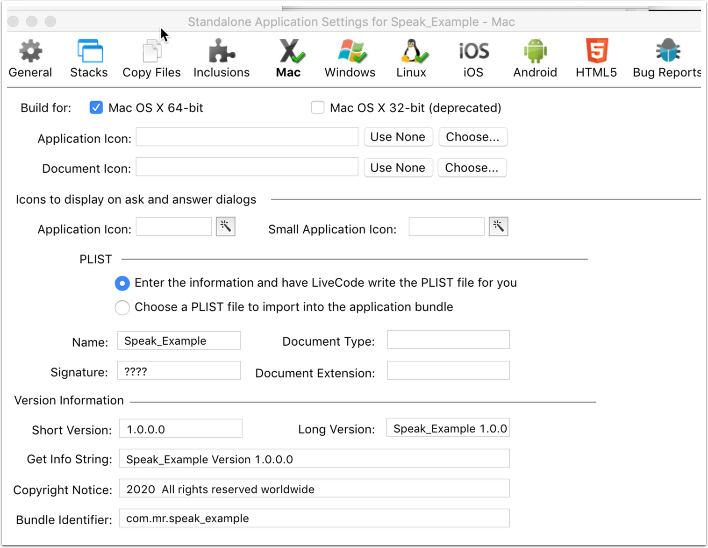 Now close the Standalone Settings window and save the stack.

Testing the our Speak_Example app.

To test our app either open Development menu and select Test  (1) or press the  Test icon in the Livecode toolbar (2). 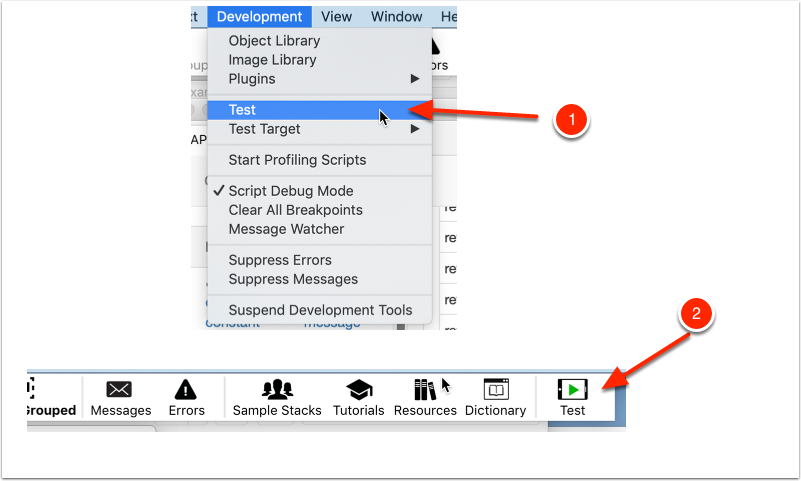 Livecode IDE prompts with a Save dialog. Press Save to save your stack before testing.

After some seconds you should see the test app on your Mac OS desktop. Enter some text into the field and press the Button. You should hear the spoken text. 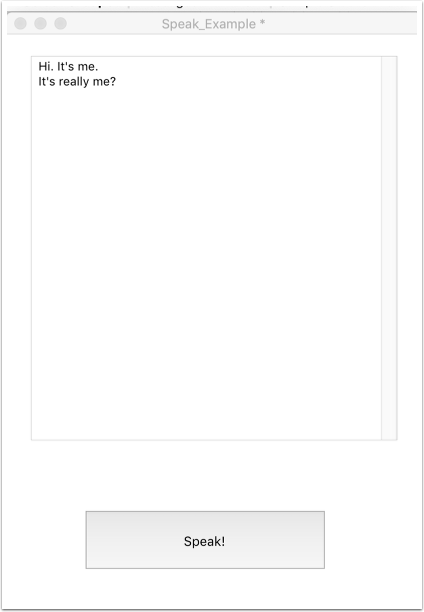 There are additional handlers and messages available in the library to the ones used in this lesson.

- speechgetVoices() (retrieves a list of all available voices. On Android this is supported from Android version 6 and above)

- speechSetVoice  (allows to specifiy the voice to use. On Android this is supported from Android version 6 and above)

where pVoice is the name of one of the available voices

speechLibraryInitialized  This message is sent when the library has been initialized

Could be useful if you want to execute some code after the library was initialized.

e.g. to fill  an option menu button with all the voice names.

speechUtteranceDidFinish This message is sent when an utterance is finished speaking

After spending a day with my students working on this it appears this library is only included on indy/business version, not community version. Is there any way I can just buy the library extension without having to buy an indy licence? Otherwise I'll have to give up the project which would be a shame.

I'm afraid this library does only work in Indy and Business editions, it is not possible to buy or use it separately. Sorry I can't help with this :(

Thanks for getting back to me. That's a shame. Seems strange that the features already available in the windows version are available for other operating systems but not included in the libraries. Anyway, not your decision I'm sure. I'll try something else. Even being able to purchase specific libraries would be better than $500 q year or nothing. Well I guess it's something for the powers that be to consider.

Hi, I'd like to know if there is any way to instead of playing the generated speech immediatly save it to file for later use...thanks

What is is that you want to achieve? You can just call speechSpeakUtterance when you want the text to be spoken.

Or do you mean you want to create a sound file?

Hi Elanor, the idea is to save the text to be spoken to a file to be played later instead to be played imediatly after being converted. Same question was posted on the forum (https://forums.livecode.com/viewtopic.php?f=8&t=35203) and according to the answers it is not possible at this time...
Thanks