How do I install LiveCode Server?

The LiveCode Server product brings our English like language to the server environment. The server engine is a separate build of the LiveCode engine with specific syntax and functionality that makes it suitable for use in command-line contexts and, in particular, as a CGI processor.

This lesson will walk you through the steps required to install LiveCode Server on your platform.

LiveCode Server is included with any Indy or Business purchase of LiveCode. To download it check your LiveCode account, you will find a tab labeled "Server". In this tab you will find your username and password (1) to download Server, as well as download buttons (2). You can select your Server version in the drop down menu (3). 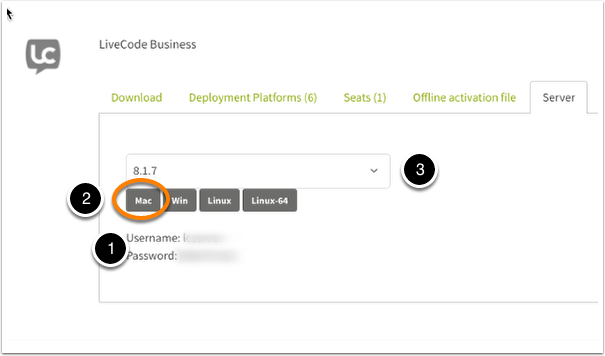 To begin downloading, click on the download button for your platform and enter the login credentials when prompted.

Once downloaded, you can unzip and explore the contents.  Your LiveCode server package should look similar to the image above, containing the server engine itself, the externals, the database drivers and the release notes.  You are now ready to begin running LiveCode Server.

The LiveCode Server engine can be run in two modes:  Command line mode and CGI mode.  To run the engine in command line mode, open up a command prompt and execute the "livecode-server" ("livecode-server.exe" on Windows) binary, passing the script name you wish to run as the first argument.

Consider a script script named "myscript.lc" in the same folder as your LiveCode Server engine, containing the following commands:

The image above demonstrates how to execute the script along with the expected output.

The second mode the LiveCode Server engine can be run in is CGI mode.  Running LiveCode server in CGI mode allows you access your LiveCode script files using HTTP i.e. as web pages.  For example, if you have a script named myscript.lc, when run in CGI mode, you will be able to access it by typing the URL of the script into your web browser (e.g. http://www.my_site.com/myscript.lc).

In order to do this, your machine must have a web server package installed and .lc file extensions mapped to the LiveCode Server engine.

The most common web server package available is Apache and is available for most platforms.  If you have access to your systems Apache configuration files, see the following lessons:

If you don't have access to your system's Apache configuration, see the lesson "How do I install LiveCode Server with Apache via .htaccess?".

The link to the instructions for "How do I install LiveCode Server on [Mac OS X | Windows |Linux] with Apache" are broken. The correct links are as follows:

How do I install LiveCode Server on Linux with Apache
http://lessons.livecode.com/m/4070/l/36652-how-do-i-install-livecode-server-on-linux-with-apache

How do I install LiveCode Server on OS X with Apache
http://lessons.livecode.com/m/4070/l/36653-how-do-i-install-livecode-server-on-os-x-with-apache

How do I install LiveCode Server on Windows with Apache
http://lessons.livecode.com/m/4070/l/36654-how-do-i-install-livecode-server-on-windows-with-apache

Thanks Martin, I have updated those links.

Hi team, I would like to explore installing LC Server on Google Cloud Platform in order to be able to access a Google Cloud mySQL DB from a LC mobile APP. I'm really confused if my goal would be achievable and if answer is yes also confused about all the steps that need to be followed in order to accomplish the aim. Therefore I wonder where I can get help. Moreover, would Livecode team consider to publish a tutorial on the subject? I guess it would be useful for many users. Many thanks in advance.

Start by whitelisting your LiveCode Server download following the instructions at the foot of this page:

Can LC server be installed on IIS ?

LC Server used to work well on IIS until version 6.7.11. There is a bug report about it. These links might be useful:

Is there any plans to update LC server and sort out outstanding issues. Last windows server that is supported for LC server is Windows server 2008 which is not longer supported by Microsoft and cannot be considered for production use.