This lesson demonstrates how to find the uncommon lines in two containers, this is a useful function for comparing lists. 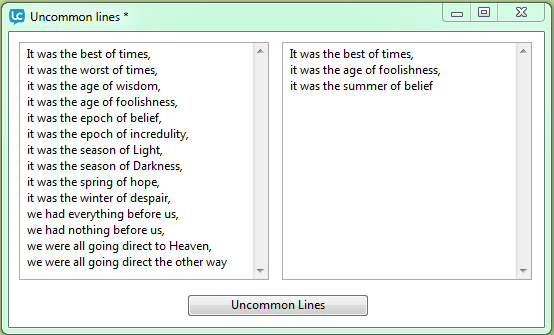 You can download the stack associated with this lesson from this url https://tinyurl.com/y6wwmwyq

The handler goes through each list in turn, and builds a third list consisting of the lines that the lists don't have in common. First, it uses a repeat control structure to scan each line in the pFirstList parameter. If the line doesn't also appear in the pSecondList parameter, the handler adds that line to a variable called tUncommon, prepending a "-" to the line with the && operator. (The && operator places a space between the "-" and the text of the line for better readability.) It also adds a return character so that the next line added will start on a new line.

Next, the handler uses a similar repeat loop to scan each line in pSecondList. If the line isn't in the pFirstList, the handler adds the line to the tUncommon variable, prepending a "+" this time.

This function is added to the card script

To make this handler faster, we've used the repeat for each form of the repeat control structure. A more traditional way to write the first repeat loop would be like this:

Many languages support this form of repeat loop, and Transcript does too: this form will work the same way as the one we used. However, the repeat for each form is much faster--depending on the circumstances, up to hundreds of times faster--than the repeat with x = start to end form.